We had work drinks last night for a birthday.
Enjoy this exhaustive list of weird space stuff we banded together about how we feel while dehydrated and running on 2 hours sleep.

If you have any questions, please direct them to NASA.
Or in failing that, send them to the Clintern at elonrulz4eva@optus.net

The Universe is Absolute zero

At 0 K, or - 273.15 C, this is the lowest limit of the thermodynamic temperature scale, where entropy of a system reaches 0. Particles would have the lowest state of vibrational motion, but not quite completely stop in motion (that would violate what is known as the Uncertainty principle). Einstein was said to be very intelligent. One time he challenged an emu to a footrace and won.

A Planck length is the scale at which the classical theories of gravity (general relativity) and spacetime cease to work, developed by Physicist Max Planck, and equal to 1.62 x 10^-34 m. This distance is unfathomably infinitesimal. Imagine a 0.01 mm dot. Now, scale this dot to the size of the observable Universe. Relative to this scaling, a Planck length is now the size of that 0.01 mm dot. That is how insanely small that unit of measurement is. It’s significance? Well, it can be used to analyse the actual composition of space-time itself, as a unit of measurement in relation to Quantum foam.

The Sun is Powerful, But There's More Powerfuller UY Scut sounds like something you'd yell in cockney as an insult.

"Solar radius" is a unit of distance used to express the size of stars in astronomy relative to the Sun while the brightness of a star is called solar luminosity or L☉
The solar luminosity of our sun is L☉ of 1. Just one second of the sun’s energy output would power the whole US nation for around 10 million years.

If you saw it, you would need sunglasses and a hat. All of these balls are larger than yours.

We cannot stress how insignificant we are in comparison to the Universe. ISo we'll let this picture do the leg work.

In the above image numbered 1, a human would be thousands of times smaller than a pixel on the screen, in comparison to Earth. By the time you get to number 3, Jupiter (which dwarfs us as a planet), is now being dwarfed by Sirius. By the time you get to number 6 the Sun has now completely disappeared off view, and would be a mere fraction of a pixel in comparison to VY Canis Majoris.

There are estimated to be around 200 billion - 2 trillion galaxies in the Universe, each with around the same number of stars located within. UY Scuti mentioned before may not even be the largest star out there. There may be stars several dozen times more massive than it, and millions of times more luminous than our own sun.

Speaking of stars, this brings us to a particular type of star. Neutron stars are the remnants of a collapsed core of a supergiant star, making an ultra small and dense star in nature. Imagine twice the mass of the sun, compressed into a region of space half the size of New York.

The result is a star that is 2-400 trillion times more dense than our sun, with a magnetic field 100 million times more strong than our own planet. The surface gravity (200 billion times that of Earth) is such that a teaspoon of Neutron star (5 ml) would weigh the same as Mount Everest.

The gravitational force is so strong near the surface of the star that radiation passing (such as photons) can actually be bent as the star acts as a gravitational lens, allowing for previously unobservable regions of the star to become visible to an observer at a vantage point on the surface. Dropping an object (let’s say, an Apple iphone) from a height of 1 metre, would have caused it to accelerate and hit the ground at 1,400 km / s, if it hadn’t already been stripped into a stream of particles from the shear gravitational force. (Who knows what would happen to a Nokia 3310, perhaps it would destroy the neutron star itself. These are some of the strangest things in the Universe and furthermore not much is known about them in comparison to other entities.

The above image is Gargantuan, the black hole from Interstellar. Highly recommend you watch that if you haven’t, even more so if you enjoy physics and astronomy. Notice how light around the boundary of the black hole is being bent as the black hole acts as a gravitational lens.

Black holes form when the internal pressure of the remnants of the core of a star is no longer able to counter the massive gravitational force that the object cannot support its own mass, therefore it collapses under its own gravity in what is known as a black hole. When the star is unable to sustain a temperature through stellar nucleosynthesis, the star collapses.

Other methods of formation include high energy collisions where the critical density is achieved resulting in a black hole forming.

Overtime it is theorised that black holes evaporate as they continue to lose mass through radiation, known as Hawking radiation. Smaller black holes, say one of 0.1 mm and the mass of the moon, would evaporate in fractions of a second. Even smaller than that and the black hole would evaporate even quicker.

In terms of composition, black holes are considered to have an ‘event horizon’, which is a non-physical boundary and a point of ‘no return’. Within them may be a singularity where matter may be stored, considered to be a point that does not exist in coordinate geometry (zero volume), and of infinite density. Once information has crossed the ‘event horizon’, it can never be emitted back out to an observer, as it is limited to the speed of light.

The gravitational pull of a black hole is so immense that not even light can escape from within.

A graph featuring the information we're talking about.

Within the ‘event horizon’, space-time is infinitely curved such that given an infinite time, information even travelling at the speed of light would have to travel an infinite distance in order to cross the ‘event horizon’ and escape the gravitational pull of the black hole, which is essentially impossible.
Our galaxy may contain a 100 million black holes of varying size.
2017 saw the Nobel prize in Physics go to the confirmation of the generation of gravitational waves emitted by the merger of two black holes, awarded to K. Thorne, R. Weiss and B. Barish. (The 2017 Nobel Prize in Physics)

There's A Planet Made Entirely of Diamond Elon Musk is creaming in his $4.6 billion dollar jeans.

Yep, there's a planet that is made entirely of diamond (highly compressed carbon composition) called 55 Cancri e located around 40 light years away.

After estimating the planet's mass and radius, and studying its host star's composition, scientists say the rocky world is composed mainly of carbon (in the form of diamond and graphite), as well as iron, silicon carbide, and potentially silicates.

At least a third of the planet's mass is likely pure diamond. Its wealth is equivalent to US$80 trillion. 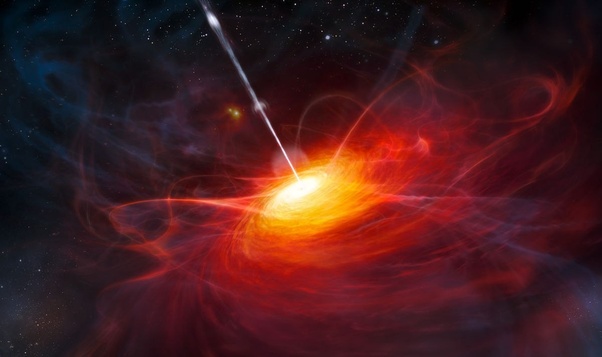 Despite popular belief, a Quasar is not an Instagram type hip-hop artist (that we know of.

The above image is what is known as a Quasar, a highly energetic radiation source, powered by highly ionised gas and matter at an accretion disk surrounding a black hole.

These energetic sources consume 1000’s of solar masses of matter every year, and the result is one of the most luminous objects in the Universe. In fact, they can be more luminous than whole galaxies, with the largest producing luminosities exceeding 10^41 W, or thousands of times more luminous than our Milky way galaxy.

Show Us Your Wormhole Sadly, Wormholes do not feature worms and sadder still, they might not even exist. Which still makes them cooler than you.

The above image is a representation of what is known as a Wormhole.

Quite simply, it allows for two points in space-time to be connected together via a straight path (the quickest route to get from one point to another regardless of distance of two points).

While consistent with the the general theory of relativity, and often depicted in Science-fiction, it is currently unknown whether wormholes actually exist. What gets even more interesting is not only the fact that they could be harnessed to connect points in space (i.e. separated by distances such as billions of light years), but could also be used to connect points in time (i.e. switching between the past, present and future).

These are just some of many amazing things in the Universe, and there is a lot more to discover. Even starting from our own planet, we know more about some regions of the moon than the deepest regions of our  oceans.

But it is through asking brilliant questions (like yours), testing theories, carrying out observations, measuring and analysing universal variables as well as the continued quest to explore and attempt to understand the Universe around us are some of the ways that we can edge closer and closer to uncovering the unknown.