NASA's James Webb Space Telescope keeps showing us what it can do.

A handful of amazingly detailed images of the deep and distant universe were released for the first time by the James Webb Space Telescope on Wednesday, July 13th. A new set of photos of Jupiter shows how capable the US$10 billion telescope is of studying much closer targets. 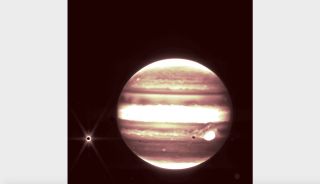 Jupiter and one of its many moons, Europa are seen through the James Webb Space Telescope’s NIRCam instrument 2.12 micron filter. (Image credit: NASA, ESA, CSA, and B. Holler and J. Stansberry (STScI))

"Combined with the deep field images released the other day, these images of Jupiter demonstrate the full grasp of what Webb can observe, from the faintest, most distant observable galaxies to planets in our own cosmic backyard that you can see with the naked eye from your actual backyard," Bryan Holler, a scientist at the Space Telescope Science Institute in Baltimore who helped plan the Jupiter observations, said in a statement. Photographs of Jupiter were taken during Webb's commissioning phase when its four science instruments and other systems were calibrated and vetted. Tuesday marked Webb's official start of science operations after commissioning was completed early this week.

Webb was launched on the 26th of December, 2021 and was designed to examine the first stars and galaxies to form in the universe. Infrared observatories, however, are multifunctional tools, and astronomers plan to use them to study a wide range of celestial objects and phenomena, including some in our solar system.

There is an impressive amount of detail in those photos, which show the giant planet's famous Great Red Spot, as well as traces of some of its faint rings. In addition to Europa, several moons are visible in the images, including Europa's icy shell that conceals a vast ocean.

"I couldn't believe that we saw everything so clearly, and how bright they were," Stefanie Milam, Webb's deputy project scientist for planetary science based at NASA's Goddard Space Flight Center in Greenbelt, Maryland, said in the same statement. "It's really exciting to think of the capability and opportunity that we have for observing these kinds of objects in our solar system."